Welcome to Part 6 of God & GMOs, a series I’m writing in consultation with my molecular biologist husband, Aaron. If you’re new around here, you might want to check out the Introduction, Part 1: The Gospel, Part 2: What is a GMO?, Part 3: “Do Your Research, Part 4:  Pursuing Truth, and Part 5: The “Big Ag” Industry so you can say “hi” in the comments. I know most readers probably haven’t heard much in favor of GMO crops online or in your church, so let me know if you have any questions or need clarification as we go!
Be sure to subscribe by email (on the right hand side of the screen —-> over there) so you don’t miss an entry!

If you’ve heard much about GMO crops, you may know that lots of people articulate specific concern about their association with glyphosate. Y’all that is a Big Word and things that sound sciency and end in -ite or -ate like that can seem extra scary sometimes. Here is the lowdown on glyphosate, why it is associated with GMO crops, why it can be a useful tool in agriculture, why it is not something to be scared of, and why we sometimes use it in our own personal garden and lawn care (where we grow some of our own food, and our children and dog play).

What is Glyphosate?
Glyphosate is an herbicide. It is used to kill broadleaf plants, which makes it an effective weed controller in modern farming. It is not the only herbicide used in farming these days, but it is one of the more popular ones because it hits a really good sweet spot of safety and effectiveness. This was first marketed by Monsanto under their brand name “Round-Up,” but their patent has expired and many companies now distribute glyphosate and genetically modified glyphosate-tolerant crop seeds. Glyphosate is far less toxic than many of the chemical inputs it replaced, or even those currently allowed under the USDA-Organic program, and because scientists figured out how to genetically modify some crops to withstand it, much of the GMO canola and soybeans in the USA are “Round-Up Ready.” This means a farmer could spray their field of Round-Up Ready soybeans with Round-Up if he or she felt it was necessary, and could do so with less time and energy than many other herbicide options available. Not all Round-Up Ready crops are necessarily sprayed with Round-Up, but they’re developed to keep that option open. It’s cheaper for the farmer to not spray if they can get away with it, but when it is needed the Round-Up used is equivalent to one soda can worth of glyphosate per acre. (That’s more land than I have around my house here, and we have, by far, the biggest yard of anyone we know in town.) Because it’s one of the safest, strongest herbicides available today, we’ve used glyphosate to get our (non-GMO) yards and gardens straightened out in all three houses we’ve owned and we’re perfectly comfortable with our kids and dog running around there after it dries.

Why is glyphosate controversial?
Using effective herbicides like Round-Up is one way farmers can practice no-till farming, which is an important component of soil conservation for sustainable agriculture. But… if you look this up online, most of the information available is confusing and misleading. The World Health Organization’s International Agency for Research on Cancer (WHO IARC) did a data analysis on a small number of the many studies on glyphosate, and in March 2015 they categorized it as a “probable carcinogen.” Because so many of the GMO crops grown in the US are part of the “Round-Up Ready” system, this moved many bloggers and anti-biotech activists to claim that GMOs cause cancer.

Does glyphosate (or “Round-Up”) actually cause cancer?
There are a few problems with this, but I want to say from the start: Cancer is no joke. Both of my grandmothers died from colon cancer, and several other older family members have experienced skin cancer and things like that. It seemed like last year was a really awful season of cancer in the people we know; I mentioned to Aaron that my facebook felt a little bit more like cancerbook. From afar I watched while a friend from college sat on the hospital floor cradling her son through his -ultimately successful- chemotherapy. (I remember cheering when he was born, maybe six years ago?) Two mothers died in agony, leaving families, spouses, and a combined five children. Three moms (two of them grandmothers) are in remission.  A friend lost his sister and lives with his own tumor chemo didn’t eradicate, so we pray it’s at least stable, but do you ever really know? A father died right before his only daughter’s graduation. Another father heals and gets to watch his three kids grow up. A grandfather is in his last stretch of suffering, but will probably die any day now. And then the old haunting picture of the grandma I named my girl after, gaunt, limp, barely cradling my infant niece in her last days pops up on my screen saver – I still cry when I see it. This suffering is not something I speak of flippantly.

The IARC’s classification of glyphosate as a “probable carcinogen” sounds scary, and if your personal life includes any of the cancer exposure mine has, it’s not something you’d want to mess around with at all. But many other organizations around the world don’t consider it to be a contributing factor in cancer at all, and if you dig into the actual information from the WHO you will see that the IARC’s risk classifications put people who would apply glyphosate all day, every day in the same cancer risk category as people who work night shift, drink hot beverages, or work in a hair salon. They also don’t think realistic exposure from eating crops that were sprayed with that teeny bit of glyphosate shows any increased health risks for consumers. I don’t worry that getting my hair cut will increase my risk of cancer even though my hairdresser’s constant exposure to all those sprays and fumes might increase hers a bit. I don’t worry that a midnight trip to the ER would increase my risk of cancer even though the night shift nurses might have an increased risk over their lifetime. I don’t worry about my exposure to glyphosate, which could come through eating genetically modified foods as part of my balanced diet or my yard, and I don’t think anyone else needs to be particularly worried about it either.

Does spraying those Round-Up Ready crops cause superweeds?
Well, yes. It can. Just like some infections can become “superbugs” that resist antibiotics, some weeds can become “superweeds” that resist herbicides. But weed resistance is a problem with other herbicides and other farming practices, too. It’s not unique to genetically modified crops or any certain chemical application. We can read in Genesis that the earth is full of thorn and thistles along with our food. We know that the only full solution to this is Jesus’ return, not in any specific farming practice or technological advance. The existence of superweeds should give us reason to be prudent but it’s not a reason to avoid using herbicides or pesticides all together.

Where can I read more about glyphosate safety and cancer incidence?
For further reading, you could check out Is Glyphosate Dangerous? and What Does Farming Without Glyphosate Look Like?
There’s also some interesting and very recent reporting about the incomplete studies the WHO used to study glyphosate from Reuters. For follow-up, this response from the IARC is available as well. 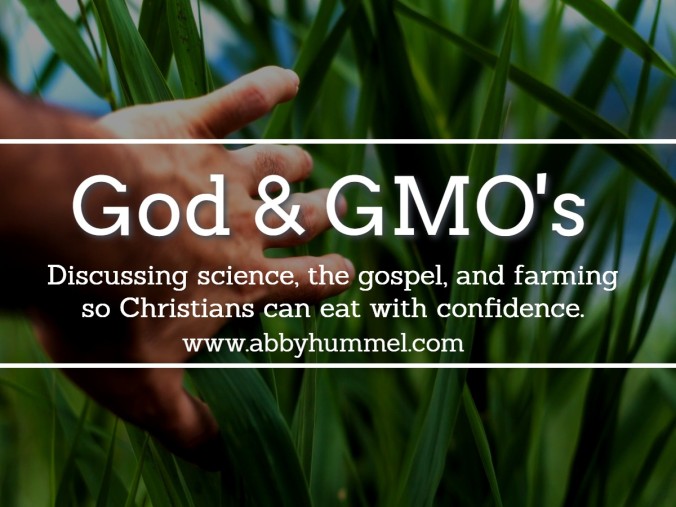 Thanks so much for reading – I hope this is helpful for you all. I’ll be back soon to talk about what on earth is going on with farming and GMOs here and around the world!

6 thoughts on “God & GMOs: What about “glyphosate” and Cancer?”