The whole cost/benefit of the kitchen project is something we’ve spent months agonizing over. I’ve heard that $15-20,000.00 is the average price of a kitchen overhaul and we are definitely not going to spend that much. But we also need to sell the house in a few years when Aaron graduates, so a frugal update should benefit us when we are courting potential buyers. I’m guessing that leaving this project undone will make anyone interested in the house automatically deduct the average cost of a kitchen remodel from their highest offer.  It seems like making a (comparably) small investment here will reap big dividends on our final selling price. This probably won’t increase our home value by $20k, but it might bring it up by about $10k, which is still more than we will pay! So after firming up in our minds that it was worth it to spend money here, we needed to get out of our hypothetical pricing and crunch exact numbers for the counters, stove, tile, lighting, and shelving that I’m dreaming of.

First we had to check out the counter top options. We are going with cheap-o laminate because it’s pretty sturdy and fits into our budget. If we were going to live here longer, we would probably spring for some sort of solid-surface counters. This laminate counter top will look MUCH better than the 53-year-old laminate counter we have now! And we were happily surprised by the cost, too.

Which one is best?

This one was our favorite!

We’re going to go with a surface that looks like Santa Cecilia granite on our dark reddish cabinets. Here is a picture of that combination with the real stuff. We’ll do a tile backsplash instead of the solid one here:

We also had to check out ranges. We desperately need a new stove and oven. Ours our separate right now and they barely work. We would probably need to replace them within the next year even if the rest of this wasn’t happening. Our criteria for the range were to have a black ceramic flat-top for the stove and a stainless steel front for the oven.  We could get a very basic one at Lowes for a list price of $649, but we checked out the scratch-and-dent section in search of a better deal.

look at that scrape!

We found this one on clearance for $599.00. It was originally almost $900.00. Unfortunately, it was truly scratched-and-dented. There were several other dents… it looks like it was dropped on its front! This was a very unfortunate appliance. We talked to someone with the thought that we might be interested in this stove for $450, but it was a no-go. We had to come back later in the week to get final pricing on counters and saw a thing of beauty sitting next to this scratched up beast. It was another black topped stainless steel range with two ovens – originally $1300 something, but on sale for $949. This was still quite a bit more than a basic range, but we kept talking about the utility of a double oven. Really, any oven is going to be an improvement since the one we have now has just one rack and the size prevents any good cookie baking. Aaron and I started talking about what we would be willing to pay for this luxury. I used words like “cookies” and “pizza” when explaining that I would definitely use and enjoy the double-oven feature, and this sealed the deal in his mind. $949 was a great deal since the stove had no scratches, but it was still well above our budget. We decided I would come back later and find out about getting a better price. Our goal was to get a range with a full warranty (since we could advertise that when selling the house) for less than $900. Imagine my joy the next day when I talked to the assistant manager and paid $700 for the range of our dreams!  We paid a little more to extend the warranty, but we would have done that for any appliance.

I also daydreamed about new (totally unnecessary) cabinet pulls that would give us a totally sleek modern-meets-“Mad Men” look: 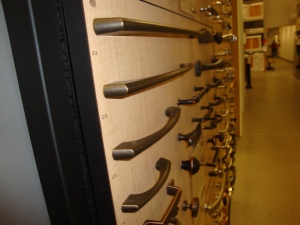 I also brought home some tile samples. We have ruled out the one in the middle. I’m leaning towards the one on the right and Aaron likes the color on the left. This is actually one of the last things we’ll do, so we can make a final decision after the counters are in. 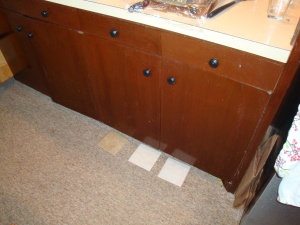 So that’s where we’re at. I’m ordering the counters this week and then we’ll be able to set up our time-line for completion!