We’ve had our first rhubarb harvest, every other dinner’s salad is fresh from the garden, and last night’s bike ride included nine bunny sightings. It’s not that warm yet, but summer has definitely started! One of the best parts of summer is… Well, who can pick just one? I like it all! But right now I’m excited about summer reading. I just finished a great Bible Study program that ran through the school year, so my regular book reading diminished drastically since September. This summer my work load is decreased a bit, and while I hope to maintain consistent study of scripture, I’m excited about extra time for real books, too. So I can’t say I’ve been reading two books a month like I did last year, but I’m going to blog about the past year’s worth of literary edification now in case you want to pick anything up for your own summer reading list. My natural bent is towards devotional, historical, nerdy, or “self-help”-ish books, but I have been richly rewarded by some intentional fiction reading, so I’m hoping to be more balanced with reading stories and “real life” in the future.
(These are listed here alphabetically by author.)

Jayber Crow by Wendell Berry
I’ve had Wendell Berry on the radar for years. In college I frequently babysat for the children of a Berry scholar (as in, wrote a real book about it), and sometimes I thumbed through the books on their shelf. But I didn’t get anything read start-to-finish until now, and I am kicking myself for taking half a decade to get around to it. This author is gently profound, and his prose beautifully marries an understanding of God’s dual revelation (in scripture and nature) with an uncanny knack for describing the human condition. Berry “gets” God, and he “gets” man. I will say that I found it especially intriguing that a confessing Baptist would write a story where the main character spends much of his life in confusion about faith and veers sharply off the path of orthodox Christian belief at the end, but I would still highly recommend this book as a story about loss, grief, growth and redemption.

“This grief had something in it of generosity, some nearness to joy. In a strange way, it added to me what I had lost. I saw that, for me, this country would always be populated with presences and absences, presences of absences, the living and the dead. The world as it is would always be a reminder of the world that was, and of the world that is to come. … I am a pilgrim, but my pilgrimage has been wandering and unmarked. Often what has looked like a straight line to me has been a circle or a doubling back. …The names of many snares and dangers have been made known to me, but I have seen them only in looking back. Often I have not known where I was going until I was already there. I have had my share of desires and goals, but life has come to me or I have gone to it mainly by way of mistakes and surprises. Often I have received better than I have deserved. Often my fairest hopes have rested on bad mistakes. I am an ignorant pilgrim, crossing a dark valley. And yet for a long time, looking back, I have been unable to shake off the feeling that I have been led — make of that what you will.” -Jayber Crow, by Wendell Berry.

***
When God Talks Back by  T.M. Luhrmann.
This is a huge volume based on an anthropologist’s report of spending years in two different Vineyard churches throughout the country. I feel like I’m cheating because I actually returned this to the library before I finished it, but I would like to finish it sometime, and I still recommend this to anyone who is intrigued by anthropology or curious about the psychological study of prayer. Which would be… probably no one. I’m okay with being a little nerdy here: I thought it was really interesting. And I truly appreciated that a non-believing author managed to write a book about evangelical prayer without an overwhelming air of cynicism. Though I don’t necessarily agree with some of her conclusions, I appreciated that she took people seriously and wanted to figure out how the human side of prayer works. My biggest beef with what I’ve read so far is that Luhrmann keeps using the word “evangelical,” while most evangelicals probably wouldn’t call the churches she visited mainstream. But, whatever. The evangelical Christian movement is almost impossible to narrowly define, even in a book that’s 300+ pages like this one. 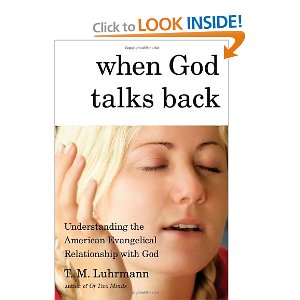 ***
Gilead by Marilynne Robinson
Gilead is a beautiful story, told in letters from an elderly minister near death to his seven-year-old miracle son. (While every child is a miracle, one who is seven when his father dies of old age is more likely to be referenced as such, I suppose.) The San Francisco Chronicle said Gilead “explores big ideas while telling a good story,” and I would recommend this for anyone who has thought about God’s will, singleness, marriage, childlessness, parenting, grief, disappointment, ministry, or the meaning of life. Which means, everyone. I liked this so much that I listened to the audio CD a few weeks after reading the book, and I was so excited to share this novel with some friends that I recommended it to several people right away. Then I found out most of them had read it already. So I feel like I was late to the party, but you should read it now, because this is one of those things that isn’t worth missing! 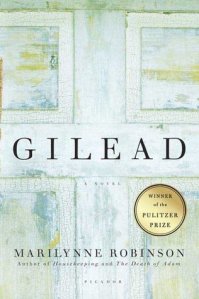 “I don’t know exactly what covetise is, but in my experience it is not so much desiring someone else’s virtue or happiness as rejecting it, taking offense at the beauty of it.” -Gilead, by Marilynne Robinson.

***
Still: Notes on a Mid-Faith Crisis by Lauren F. Winner
I have loved several of Lauren Winner’s other books, especially her conversion memoir “Girl Meets God,” so I was very curious about “Still: Notes on a Mid-Faith Crisis.” Written out of the spiritual torment she faced grieving her mother’s death and doubting her faith in a difficult marriage resulting in an (admittedly) unjustifiable divorce, Winner tells her raw story of doubt and faith. Many times, it seemed that her “journal-entryish” writing (like CS Lewis’ “A Grief Observed,” but a bit more organized) left me feeling emotionally brutalized along with her – doubt is a painful thing, and it hurt to read about, too. In both knowing personally that Christian marriage is not all picnics and rainbows, and walking alongside a dear friend in the aftermath of marital dissolution, I have a hard time feeling sympathy for the trauma Winner faced after leaving her husband. I don’t know the whole story behind that, but I do know she reflected on those grave choices with honesty and renewed faith. It’s not as though she can go back and change it, and I am grateful God meets us where we are instead of where we should be. In many ways, this book reminds us that life is tough and God, though sometimes hard to understand, is good. Winner writes with a haunting narrative voice and her words are thought-provoking in some ways I didn’t expect. For that reason I think it deserves mention here. 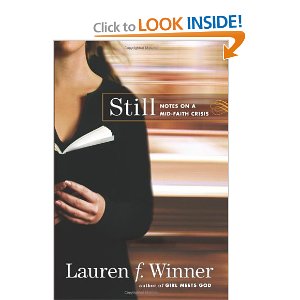 “The enthusiasms of my conversion have worn off. For whole stretches since the dream, since the baptism, my belief has faltered, my sense of God’s closeness has grown strained, my efforts at living in accord with what I take to be the call of the gospel have come undone. …And yet in those same moments of strained belief, of not knowing where or if God is, it has also seemed that the Christian story keeps explaining who and where I am, better than any other story I know. … I doubt; I am uncertain; I am restless, prone to wander. And yet glimmers of holy keep interrupting my gaze.” (‘Lord, to whom shall we go? You have the words of eternal life.’ John 6:68, esv.) – Still, by Lauren F. WInner.

I have a few things on my summer reading list already (Eric Metatexas’ Bonhoeffer biography is in progress, Return of the King by Tolkien, the Huger Games trilogy by Suzanne Collins, In This House of Brede by Rumer Godden, and Great Expectations by Dickens), but I’d love to hear more suggestions if you have any to offer!