In the aftershock of bad news, I seek out solo projects. I think it’s a good system. Working in the sun and accomplishing something seems to bring mental clarity to the cloudy thinking of grief, but you can’t really avoid feelings the way aimless web browsing or watching movies allows for.  We have been touching up the exterior of the house, so it was high time I got around to painting a second coat on my garage door.

My big confession here is that it was three years between coats of paint. We’ve been doing a lot in the meantime, and Aaron and I are both notoriously bad at getting things half-way done, so we’re trying to do a lot of “finishing” this year. The big push that got me started painting this the first time was our first miscarriage, and so I was thinking about that during the second round of painting. I was remembering the shock of a loss after falling in love with a really cute heartbeat on an ultrasound screen, about missing a little baby I would never set on my lap, about the million questions I couldn’t help asking then. At that point I was pretty sure I could get through things if I just “knew.” If I could just know I would feel better someday, and that I would be ready and able to have a baby at a certain time, even if it wasn’t as soon as I wanted, I thought I would be satisfied. Or even if I knew I would not have a baby, I could at least start making peace with that and build dreams for that life, too.

I would not have been satisfied to know that not only would there be a three year gap for touching up the paint, but it would also occur fresh off a third consecutive loss, when the doctors stop saying it’s a sad fluke and you’ll have a new baby in no time as they do at first. I did not know yet, when I was 2 years out of college, that sometimes knowledge isn’t the gift that we want it to be.

[Father] turned to look at me, as he always did when answering a question, but to my surprise he said nothing. At last he stood up, lifted his traveling case from the rack over our heads, and set it on the floor.
“Will you carry it off the train, Corrie?” he said.
I stood up and tugged at it. It was crammed with the watches and spare parts he had purchased that morning.
“It’s too heavy,” I said.
“Yes,” he said. “And it would be a pretty poor father who would ask his little girl to carry such a load. It’s the same way, Corrie, with knowledge. Some knowledge is too heavy for children. When you are older and stronger you can bear it. For now you must trust me to carry it for you.”
– Corrie Ten Boom, “The Hiding Place.”

This doesn’t mean I’m not angry and asking, or that there aren’t going to be dark days with hard questions, but I want to keep these conversations with God and my doctors in perspective. God doesn’t owe me an explanation, and it might not be one that would make me happy anyway. The doctors owe me any information they have, but they can’t always figure things out or solve them. I am glad I didn’t always know the future in past difficulty, and that same troubling ignorance may be a blessing now, too. (And maybe if I preach it loud enough to myself today, it will be easier to believe when I stop wanting to.) 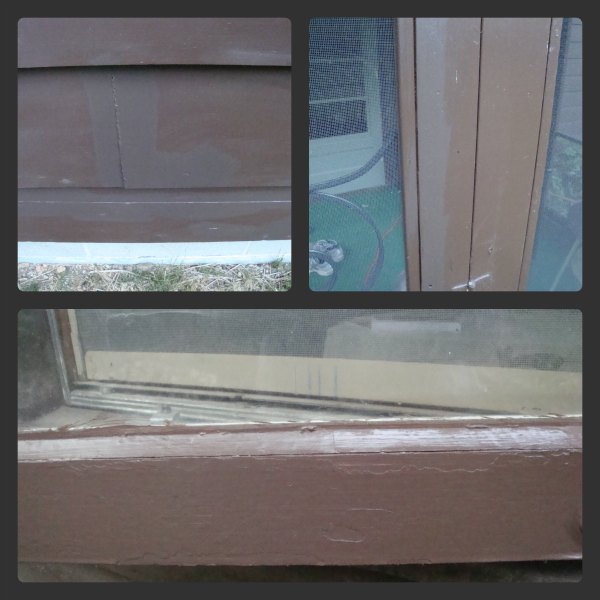 Beyond these lofty thoughts, there is other frustrating news cropping up in the painting project. We have just discovered, after four years, that our house is at least three different shades of brown. It seems that there has been a lot of color-matching-of-a-color-match for paint supplies under the previous owner’s care, which looks okay until we try to repair anything. All three of these areas have been repainted, and the paint that is right for the window trim is wrong in different ways for both of the top two pictured areas. Scraping and repainting the trouble spots has become very complicated.

7 thoughts on “too heavy”