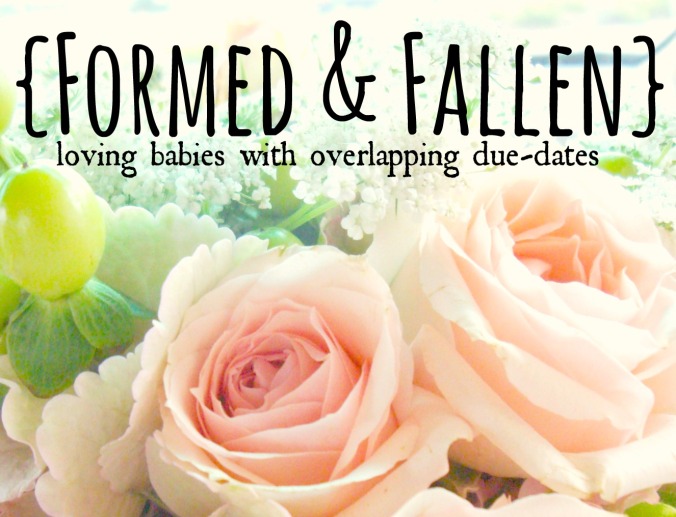 With every day a  mad rush to get the entire house “nested” (for free, of course), get the dog exercised and trained as well as possible, get my fledgling business off the ground, and maybe eventually get over my deep loathing of infant car seat research so we can start amassing baby gear… I find myself tired, even though it doesn’t seem like I’m accomplishing much. In these days of unseen (and generally unrewarded) labors, I’ve been thinking a lot about what I’ve been called to, and how this little girl’s presence will require new and beautiful things from me. These will be mostly unseen and generally unrewarded, as well.

I’ve thought, prayed, and cried much over the topic of motherhood in the past few years of miscarriages and waiting, and I think what came out of that only strengthens and supports whatever new adventures come with mothering a living child. Those years of difficulty and wrestling revealed that childless mothering is still a legitimate vocation, even when I resented it. Sometimes I still do. What is it, really, to be a mother? Isn’t it essentially to love, to give yourself away, to be brave? And isn’t that required even more of a woman who grieves a child than a woman who raises one? I think so. There are little babies I will never really see, hold on my lap, pack lunches for, or read Bible stories with, but I am still their mom. The loving and giving that happens because I’m their mom is expressed in different ways, usually in connecting with other women who are distraught about their own losses and teaching others how to be caretakers and truth-tellers. Even though I wish everything had been so different, these works are just as significant as the work I will do in bringing up the daughter I’m pregnant with now.

It seems weird to talk about miscarriages, being pregnant again. It’s probably weird for other people to hear about. I realize this. It probably makes these months a little more anxiety-ridden for me — I dreamed last night that this girl had died, and I woke up crying inconsolably. I didn’t know it was just a nightmare until she started moving around ten minutes later. Maybe it’s like that for every pregnancy? I will never know. Despite what hardships this brings, the grief and wrestling that accompany this pregnancy impress on me that the world needs brave women all the more.

Case in point? I met someone recently who heard my history from a mutual friend, and felt the need to tell me, “I’ve never lost a baby or had problems, but there is no way your first-trimester miscarriages were as hard as my friend’s stillbirth. I mean, she had already felt the baby move and had to deliver it. And now you’re having this baby, so it worked out.” Though I wouldn’t judge someone who responded to those comments with violence, and would probably be willing to lie defending them in a court of law… I managed to graciously reply that grief isn’t a competition, every life matters, there is no reason to dismiss my experiences, and babies aren’t replaceable. (And really — every day she grows is a gift; pregnancy doesn’t guarantee survival.) Was it a little awkward? Well, yes. I told her she was out of line. It would have been even more awkward to let that slide, knowing those comments could be repeated to someone who was still very traumatized. I needed to respond with bravery, since that lady might need to be someone else’s caretaker someday. It’s always the right time to speak the truth in love.

There will be new, hard, and beautiful expressions of motherhood that come with this baby girl, but just as she doesn’t erase or solve the problems of the miscarriages we had before her, my calling to mother her doesn’t eradicate the callings that grew out of those experiences, either. I’m confident the loving courage needed for each kind of motherhood can only support and uphold the other one. Since the world needs more brave women in every generation, this is the best example I can set for my daughter, too.

(Before we get into serious discussions about bravery, I will warn her about stranger danger and eating yellow snow. We need to take these lessons one day at a time.)