“O God, from my youth you have taught me, and still I proclaim your wondrous deeds. So even to old age and gray hairs, O God, do not forsake me.” Psalm 71:17-18 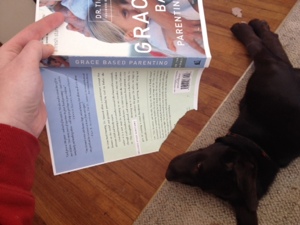 You would not assume I have any perfectionist traits if you stopped by my home at any time, particularly right now, since I tried to finish taxes this morning without crating the dog. (The result? I have not finished submitting the taxes and there are bits and pieces of the cover to “Grace Based Parenting” all over the living room. Yes, this is hilariously ironic.) Despite my – hopefully improving – free-spirited tendencies with most details, I do have a teeny compulsive anxiety trait that has plagued me as long as I can remember: I have very particular need for numbers to be in order. I always add the numbers on license plates while I drive, and certain phone numbers or birthdates are more “pleasing” to my numerical senses. In middle school, if I worked on algebra assignments before bed, I had very strange mathematical dreams. When I look at a digital clock, I am doing math problems with the numbers much longer than I’m paying attention to what time it is. (Right now, it is 1:21, which is 11×11. You can also use addition so the ones on outsides to add up to the two in the middle.) This is weird. There is probably a name for this sort of thing. It doesn’t interrupt my life or relationships, so it’s not really a problem – just a quirk. I hope.

The birthdate of April 12, 1986 really works out for me because each number is even. I think birthdays in the Spring months should be on even-numbered dates and fall birthdays should be odd-numbered. (A few years ago, I was pregnant with a baby due in April and told Aaron I was nervous it would have an “odd” birthdate.) So now, in a strange way, I am breathing a little easier to be 28 and not 27 because it feels better to be an “even” age. (27 is slightly redeemed by being “Three-cubed,” or 3x3x3.)

Turning 28 on 4/12/2014 was almost a dream-come-true for my numerical neuroses, even if it is more reason for Aaron and I to joke that we are getting old and crotchety. On the way out for my birthday dinner, he said, “How can you be 28? I’m only, like, 25!” Even when we can’t keep track of the numbers, our life reflects a little more maturity (or boring-ness, take your pick.) We used to speak of camping more often; we now find that cooking over the backyard firepit and sleeping in our own bed is satisfying. “Requiring frequent walks” was a strong argument in favor of adopting Max. I get sick of having so many clothes in my closet. I don’t think I look old now, but pictures from college (or my wedding) do look young. It was a little strange to see that most of the athletes on Olympic podiums this year were younger than me. There is no denial in any of this that life is going forward and that means getting older! Maybe an obsession with that mathematically-pleasing birthdate is altering my senses a bit, but I can’t shake loving the secret I’ve whispered among friends: getting older is good, and it gets better every year.

Even when things don’t look like they were “supposed” to, every year there is more grace and growth, more unexpected gifts, more glory revealed. There is more joy (and less fear), more comfort in my own skin,  more beauty to discover and display, more delight in becoming just who I was created to be. So right now, the excitement of turning the corner into 28 feels like a drop in the bucket compared to whatever lies ahead.

“The righteous flourish like the palm tree and grow like a cedar in Lebanon. They are planted in the house of the Lord; they flourish in the courts of our God. They still bear fruit in old age; they are ever full of sap and green, to declare that the Lord is upright; he is my rock, and there is no unrighteousness in him.” – Psalm 92