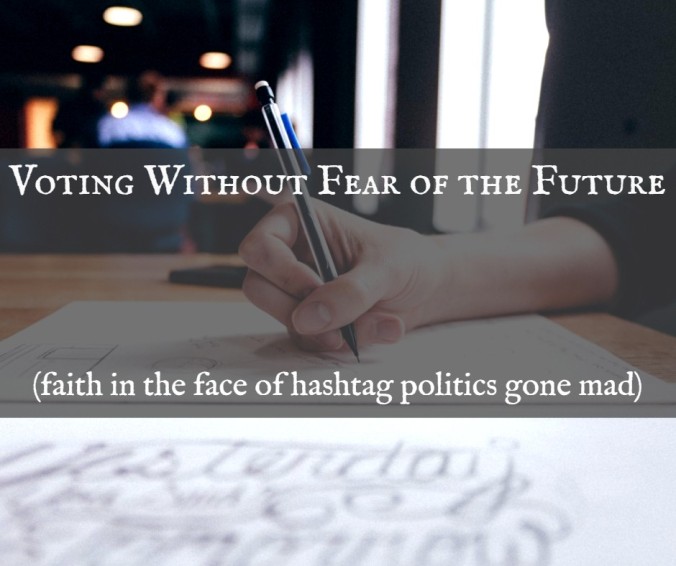 She is clothed with strength and dignity; she laughs without fear of the future. – Proverbs 31:25, NLT.

If I can manage to register to vote in Missouri before then, I’ll be in a polling booth on November 8, exercising one of the greatest political freedoms in all history: a woman, voting, in a free election. I don’t want to lose my wonder at this privilege.

This is the 4th election cycle I have participated in. Since no governmental system or politician (especially) is perfect, it’s likely that I will sometimes vote pragmatically instead of ideally, as I have already done in the past. But this time and this election is different. Neither major political party has nominated a trustworthy candidate representing anything I believe is supposed to be right and good about this nation, so I refuse to vote for either one of them. I plan on casting my ballot with a write-in vote for my friend Cate, who is not actually running for President (at least not this time).

Letting the rest of the country decide who makes it to the Oval Office feels strange to me. I do not pretend to be a political scholar with elite Washington insider secrets, but I do strive to be thoughtful and informed. Taking the responsibilities of democracy seriously, I study the Constitution.  Taking my responsibility to love my neighbor seriously, I remember living overseas among squalor – the  aluminum-shack-and-no-toilet variety. I see what war winnows even from a man who walks away from battle honorably. I have wept for tiny lives lost from my own body while other little ones were legally destroyed at the exact same age. In the same breath, motherhood (even more than I expected) has burdened me significantly towards the plight of women in poverty, especially those with unplanned pregnancies or children of their own. None of these things fully exclude that I am a woman prone to fear about my own circumstances, and what things might be like for my children in the years to come.

I expect to wake up on November 9 and hear that either Hillary Clinton or Donald Trump has been elected president. Checking the news that morning with coffee in hand, making my kids some oatmeal, I may sigh a bit. I am determined that I will not despair. When we settle at the table, those dear little mouths will babble along while I sing “This is the day that the Lord has made/ I will rejoice and be glad in it,” as we always do for our breakfast prayer. It will be just as true then as it was this morning.

Singing songs and eating nutritious food with my healthy children is fairly idyllic while so many things in the country – and the world at large – seem like a mess. Thinking about that makes me feel very small. The problems present in our current systems for healthcare, poverty assistance, and education are not ones I can solve. I don’t really know how to battle systemic dysfunctions that usually benefit me and penalize others with fewer resources. I can’t decimate ISIS or breathe life back into the lungs of that little boy who drowned between Syria and Turkey. Sometimes political activism allures me by dampening my sense of powerlessness. When there is Bad Stuff happening, I can vote for Someone Else to enact The Right Plan (As Approved By God) and feel like I’ve really done something. It is always a short-lived relief.

The vote I cast this year is not about electing a president, but about telling the powers-that-be, “I care enough to vote and I don’t like these options.” Mostly, I’m hoping enough people join me in sending this message to cause a shake-down and rebranding in Washington politics so I can have better options next time around. I can’t pretend my vote for president is going to solve the world’s problems, like I have sometimes accidentally believed in the past. Instead, this forces me to look at what I can, and should, do:
Feed my children breakfast while cultivating a hope-filled home.
Befriend my neighbors while walking alongside people who are hurting around me.
Think less of my own circumstances while speaking up for the cause of the afflicted.
Search out the organizations and ministries that are doing good on a broader scale, supporting them instead of upgrading my own lifestyle.

These are not small things.

It’s also not a small thing to say “no” to fear. The rhetoric of political seasons like this one becomes especially charged; the promises are impossibly yuuuge (sorry, I had to do it) and the threats -implied or explicit-  are fearsome. Yet when God’s word tells me not to fear, it’s not excluding politics. When an election cycle doesn’t go the way we want, it often reveals a sort of political idolatry. What I heard people saying after Donald Trump became the presumptive nominee for the Republican party sound like an email forward I received after President Obama’s election in 2008, urging me to trust in God despite the impending apocalypse ushered in by the “victory of Evil and Darkness.” (Let’s trust this was a spiritual reference, not a racial one. Either way… what?) Those sentiments betray a misplaced hope in political solutions to spiritual problems, because trusting God is always the right thing no matter what is happening in the government. Eight years later, I still don’t believe the President is working for goals I support, but that election definitely was not The End Of The World As We Know It. And even if it was? My primary call as a Christian in loving God and others has not diminished because of it.

Resting in the authority of God means accepting the responsibilities and privileges granted in my earthly citizenship – I’m not, for example, staying home on election day, or suggesting women in free countries should stop voting until women everywhere can do the same. It also excludes confusing any brand of patriotism with Christianity: Political powers (including parties) rise and fall, and it is unlikely that God is as much of a Republican or Democrat as some want to imagine. It calls me to funnel more energy to loving my neighbor than to elation or frustration about whatever democracy has wrought.  Mostly, this compels me to face November 8 (and all the crazy news I hear until then) in confidence, without fear of whatever news I hear on November 9 for the years following.

3 thoughts on “Voting Without Fear of the Future”